Golf course transforms slope into a beautiful spot for couples to tie the knot with hardscape retaining wall Rosetta Outcropping. 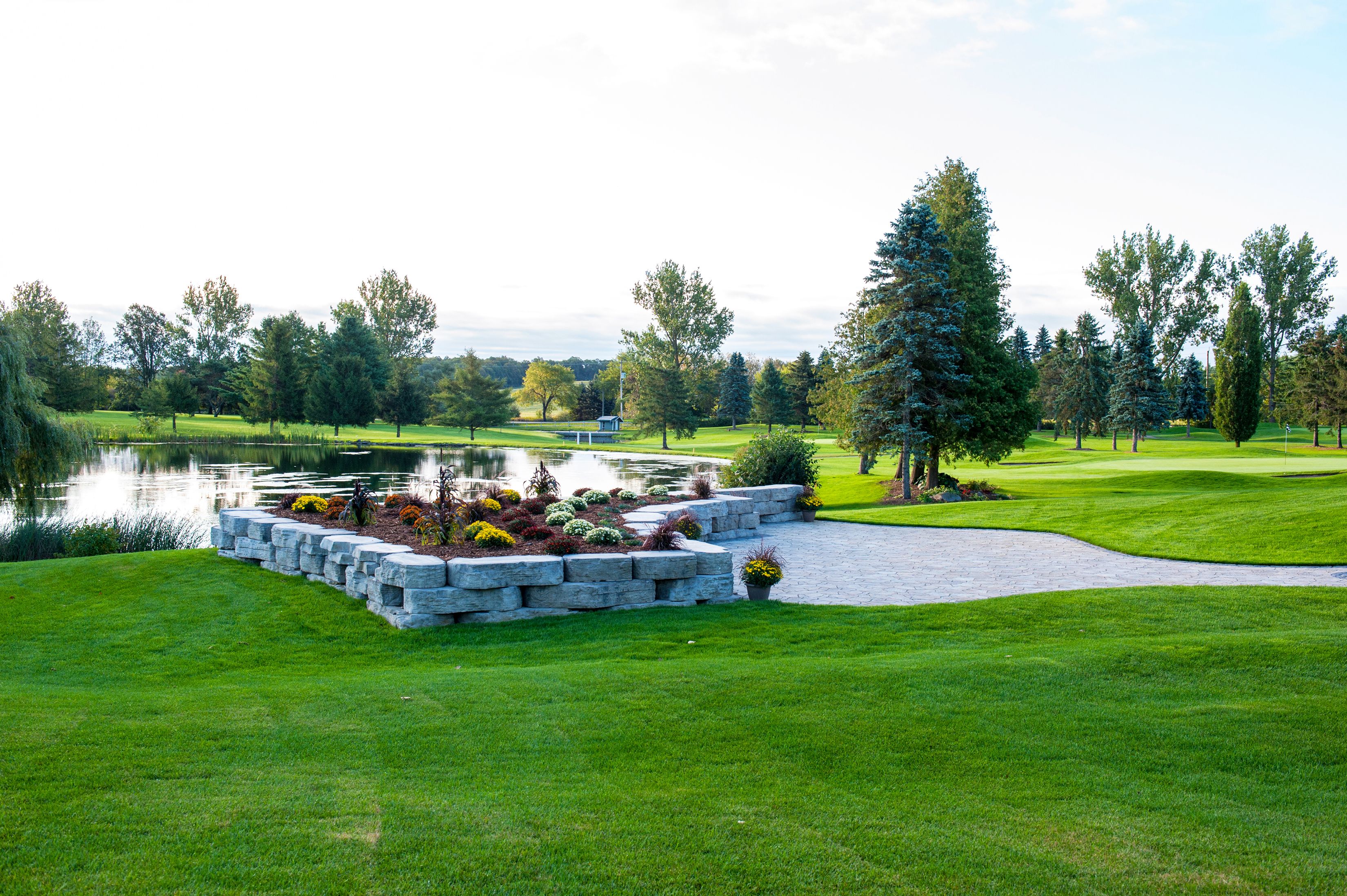 The entire project took about four months to complete. Thanks to Rosetta Outcropping, the 18th fairway has a "knockout" view. 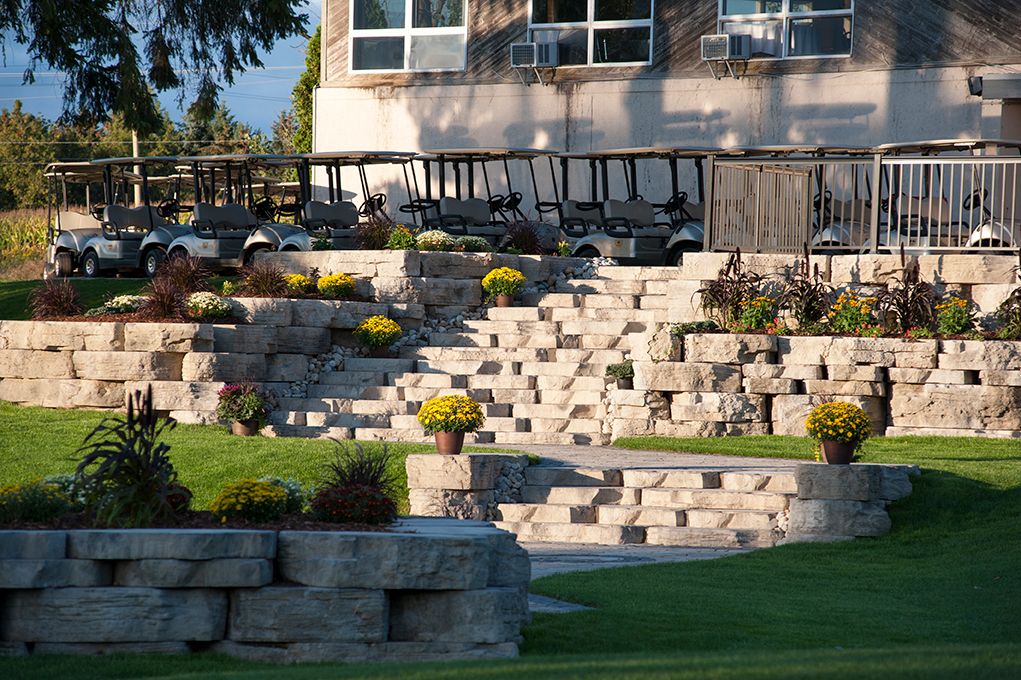 The significant grade change from the parking lot to the patio required a reinforced retaining wall, so natural stone was not an option. That's where Rosetta came in. Other products shown: Outcropping and Irregular Steps 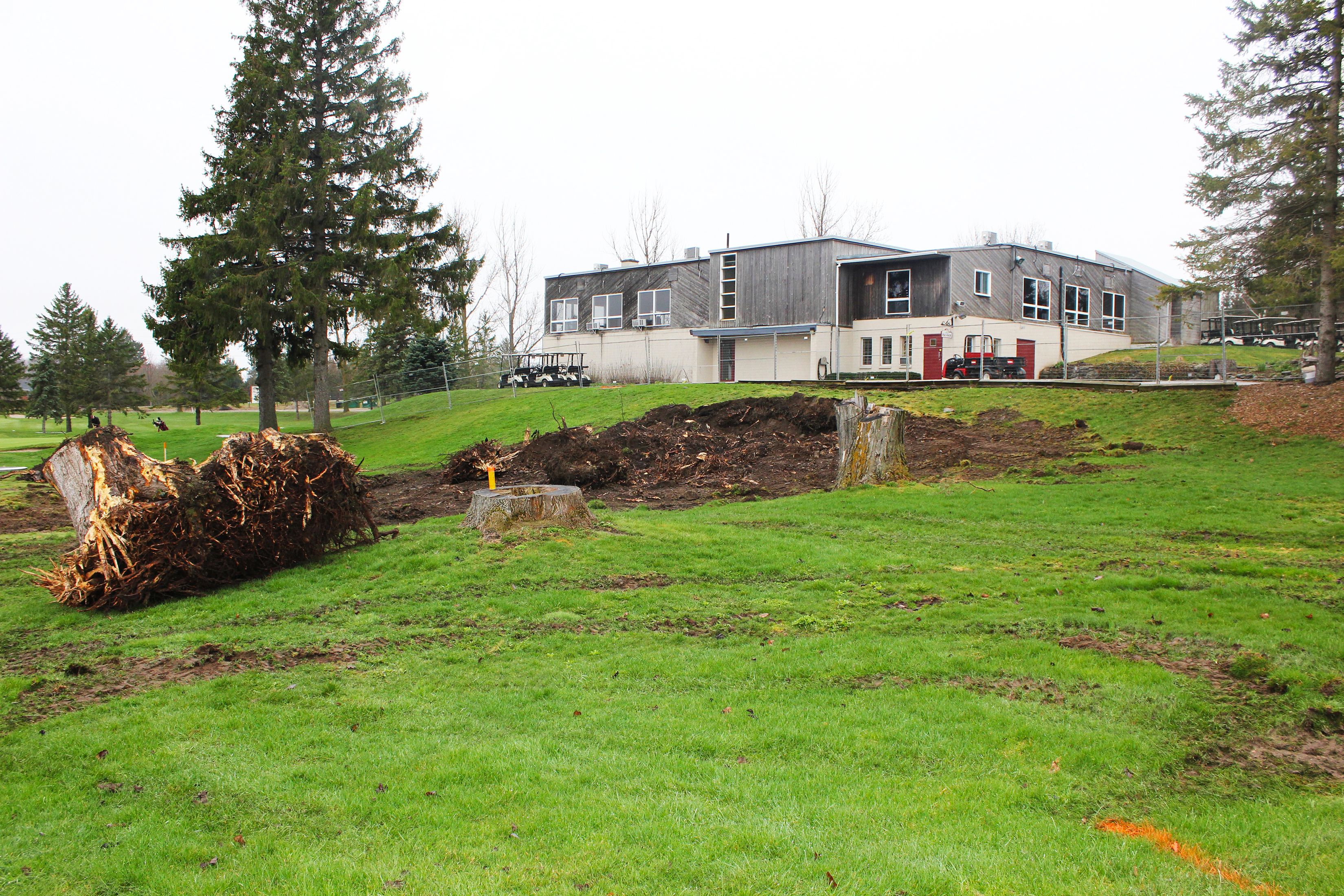 When a golf course wanted to turn an unsightly hillside and nearby pond area into an outdoor wedding venue, they needed a solution that would look great in many future wedding photos.

The entire project took about four months to complete. Thanks to Rosetta Outcropping, the 18th fairway has a "knockout" view.

The significant grade change from the parking lot to the patio required a reinforced retaining wall, so natural stone was not an option. That's where Rosetta came in. Other products shown: Outcropping and Irregular Steps

With more and more weddings happening outside each year, golf courses across North America are becoming the go-to place for outdoor weddings. With the goal of capturing some of this growing market, the Dundee Country Club launched a major construction project in 2013 that included renovating the hillside outside the clubhouse to create a beautiful setting for couples to say, "I do."

The hillside needed to be transformed into an aesthetic place for guests to enter the venue and for brides to walk down the aisle. In addition, the flat area near the pond needed to become a patio area for ceremonies to take place. The challenge was finding a retaining wall system that would look good enough to be captured in wedding pictures for years to come.

The significant grade change from the parking lot to the patio required a reinforced retaining wall, so natural stone was not an option. Initially, designers considered several block systems but determined that they looked "too much like concrete."

That's where Rosetta came in. "I had been looking at Rosetta walls for several years but never had the opportunity to use it on a project," explained designer and installer Charlie Graci of Green T Lawns & Landscaping. "Once I started brainstorming some ideas for this project, I thought of Rosetta right away."

The project's design included a curving 7-foot (2-meter) high, tiered Outcropping Collection wall from local Rosetta manufacturer Brown's Concrete. The Outcropping Collection from Rosetta is a larger-scale wall solution that accurately replicates natural stone with an extremely high level of detail. With consistent dimensions that mimic the look and feel of nature, Rosetta is a great fit for projects that require the aesthetics of natural stone, but the durability and consistency of an architectural grade precast system.

"There was no room for traditional geogrid or Paraweb reinforcement because the parking lot was located so close to the hill," explained Nick Lang of Brown's Concrete "The engineer was able to design the Rosetta Outcropping wall with cast-in-place concrete backfill. That way, they didn't have to sacrifice parking lot to create the wall."

The wall was bisected by a 15-foot (4.6-meter) wide staircase created using Rosetta step blocks which were custom cast by Brown's to achieve the width required by this project. In total the project required 27 runs of steps split between two staircases.

As work progressed, the scope of the project grew. "The original concept didn't have a walkway, but we quickly recognized that women in heels couldn't walk in the grass," Graci explained. "So we added a pathway and another set of steps to even out the grade change."

"I had never worked with installing Outcropping stone before, but once the base work was done it just snapped together," Graci explained. "When you use natural stone there are irregularities that make it hard to install; this is engineered, and you can get that great look faster and easier. It really builds itself because it's all level. As an installer, it's just a dream to work with."

The 18th fairway runs parallel to the project, and the view is "a knockout," Graci says. In total, the project required 1,400 square feet (130 square meters) of the Rosetta Outcropping Collection and Freestanding Collection blocks, which were used to create the planting beds.

PRODUCTS FEATURED IN THIS PROJECT